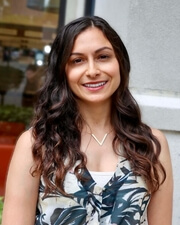 She has been practicing optometry since 2016, specializing in primary eye care, and was inspired by her aunt, who owns a successful optometry practice in Puerto Rico.

A native of San Diego and fluent in Spanish, Dr. Biaggi enjoys hiking, biking, rollerblading, visiting the zoo, and traveling. She has a younger sister who works as an architectural designer. in San Diego and her parents are happily retired. They are always busy spoiling the family Morkie named Koda, and dog sitting her sister's energetic puppy, Luna.

Dr. Biaggi relates the following story of a patient who had an impact on her career:

About 2 years ago, a man came into my office for a routine eye exam with no vision complaints. As I was going through my usual examination with the biomicroscope, I immediately noticed that something was not right - a large pigmented mass spreading from the edge of the iris to the cornea. I referred the patient to see a specialist, explaining that the lesion looked very suspicious for an iris melanoma. A few weeks later, I received a note from his wife, thanking me for detecting the cancer and saving his eye. This story reminds me that my ultimate job as an optometrist is to help people preserve the wonderful gift of sight.